Is Your Fireplace Winter Ready?

With the winter month fast approaching, it’s a good idea to ensure that your fireplace is in good working order. However, after being dormant for at least half a year, it’s hard to tell what condition you might find it in. It’s best to check and make sure there are no problems with your fireplace now before you really start to need it.

We at Real Flame understand all too well how serious little problems can become if left unattended; a little preventative maintenance now can save a lot of money and time later this winter when you’ll really want to have a fully functioning fireplace. So here we look at signs that your fireplace may be in need of service.

Burning Wood (or other bad) Odours

If you start to smell burning wood or other potentially unpleasant odours from your fireplace even when it’s not lit, there may be too much creosote build-up in your flue. Creosote and soot build up naturally in your flue as you use your fireplace, but if your flue and chimney are not cleaned regularly, these by-products can cause various problems.

There are three basic stages of creosote deposits: the initial stage looks flaky or dusty, while the latter two stages look more like sticky tar. Creosote build-up can cause chimney fires, so flues and chimneys should be cleaned regularly to avoid accumulation.

Having your living space or entire home inundated with smoke could be a sign of the third and most critical stage of creosote build-up – it could even cause a chimney fire! Together with soot, these tar-like deposits can create blockages in your flue that not only hinder ventilation but can potentially damage your chimney lining. While professionals may be able to clean the liner, your flue might need replacing, once it gets to this point.

Difficulty in starting a fire or one that burns unusually slowly may indicate an obstruction in airflow, which could be caused by either creosote or soot build-up. Slow-starting or slow-burning fires are good indicators that your chimney may have an obstruction and be in need of cleaning.

Rust on the Firebox or Damper

While cleaning off any rust you might find on your firebox or damper is important, it’s even more important to identify its cause. Rust is caused, of course, by moisture, and there ideally shouldn’t be any moisture near your fireplace. One possible cause is rain or snow that’s coming in down your chimney. Another possible cause might be cracks in the flue lining itself, which is a much more serious problem that should be addressed immediately.

Mortar or other Chimney Remnants in the Fireplace

If you notice stuff at the bottom of your fireplace that’s obviously not ash or burnt wood, it could be remnants of mortar or chimney tiles, which can come from a shaling flue liner. This could be an indicator that your flue has lost its structural integrity and needs replacing. This could also be caused by excess soot that has built up inside your chimney, which is a clear indicator that your chimney needs cleaning – if the soot is left to build up for too long it can cause blockages or serious damage to your chimney or fireplace.

If birds or rodents are nesting in your chimney this could drastically reduce ventilation. You might hear tell-tale signs of animal activity, such as scurrying or scratching noises or even see physical evidence. If you notice droppings, nesting debris or even pieces of brickwork in the bottom of your fireplace, this could mean that your chimney is harbouring unwanted guests. A professional chimney sweep can identify the cause and repair any damage.

White stains on surrounding brickwork could be a sign that water is getting in your chimney. Moisture from rainfall or melting snow can permeate the brick of your chimney. As it freezes, the moisture expands. Over time, this creates spalling, which looks like white flaking on the outside of the brick. Another kind of white flaking called efflorescence is actually a relatively harmless chemical reaction caused by minerals left by moisture that form tiny crystals on the surface of the bricks once the moisture evaporates.

Although these mineral deposits are themselves harmless and can easily be cleaned off, an excess amount of efflorescence on brickwork could indicate a more serious problem like warm air from inside the house condensing on the interior of the chimney during cold weather, or more alarmingly, your flue liner might be cracked or broken allowing for conditions that will cause brickwork to deteriorate rapidly.

Make sure that you inspect more than just the fireplace itself – it’s just as crucial to check the outside of the chimney, for example, as it’s vulnerable to the freeze-thaw cycle of the seasons. If you notice cracks in mortar joints, your chimney’s structural integrity may be compromised, which could lead to a whole host of other, bigger problems, including an eventual chimney collapse. 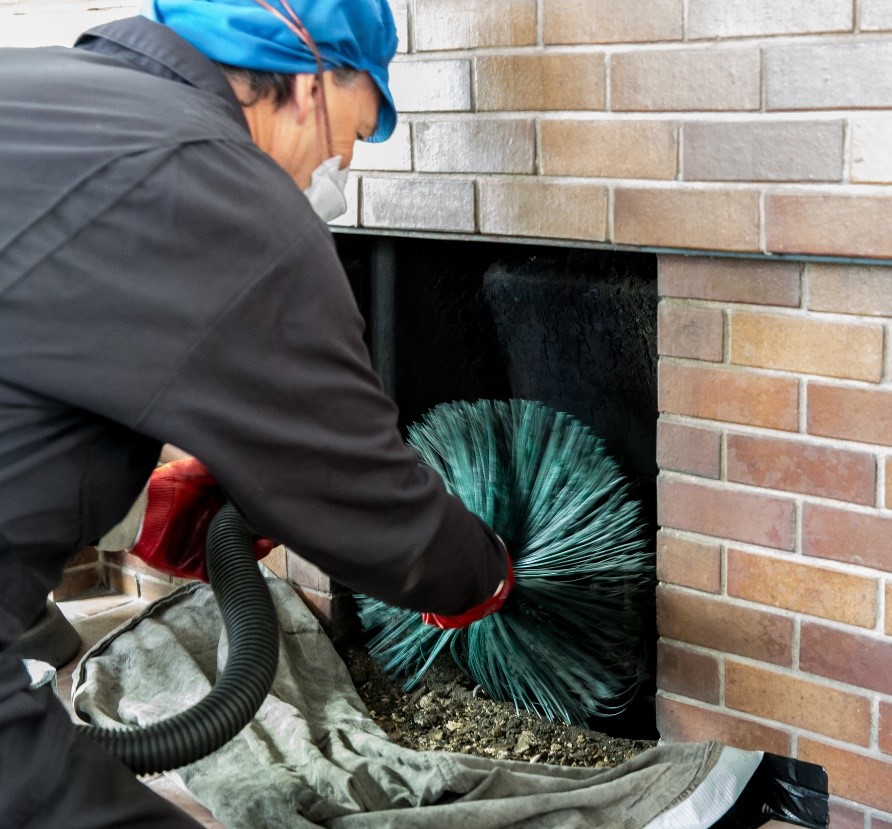 If you detect any of the above signs, you should contact us immediately. Dirty or clogged flues can significantly reduce the performance of fireplaces, while posing a potentially serious threat to your household the longer they are left untouched. We recommend having your chimney inspected every year for damage and creosote build-up.

If you’re unsure about the condition of your fireplace or chimney, it’s best to consult a professional before a small problem leads to more serious and costly ones. Real Flame provide chimney sweeping and testing of fireplaces in London; if you’re based in the metro area and concerned about the health of your fireplace, contact us today.

Get in Touch with Real Flame for more Advice and Information
This entry was posted in Blog, Fire Advice. Bookmark the permalink.
Copyright 2020 Real Flame | All Rights Reserved
Designed, Promoted & Powered by SQ Digital